Window World Participates in St. Jude Give Thanks. Walk™ in 28 Locations Nationwide 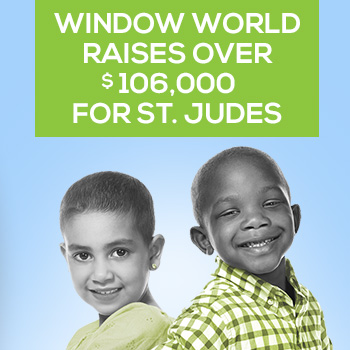 Window World, Inc., located in North Wilkesboro, N.C., raised a total of $18,495, making it the top fundraising team in the Charlotte, N.C. region, which included over 80 teams. Leading the charge was Chairman and CEO Tammy Whitworth, whose total of $5,250 made her the top individual fundraiser in the entire Charlotte market.
“St. Jude remains near and dear to the hearts of the entire Window World Family,” said Whitworth. “Watching our teams from coast to coast helping others by participating in this event is truly remarkable. We’re honored to partner with such an incredible organization.”

In an earlier release, St. Jude shared that since the Give thanks. Walk began, it has raised more than $17 million to help provide cutting-edge treatment and pursue visionary research to find cures and save children battling cancer and other life-threatening diseases. These funds ensure that no family ever receives a bill for treatment, travel, housing or food.

Nationwide, Window World® participated in the walk with 28 teams raising over $106,000 through a combination of fundraising and sponsorships in their local areas. Every dollar raised contributes to the fundraising total for Window World Cares®, the charitable foundation of Window World. Next week, Window World will celebrate the fifth annual “Window World Day” at St. Jude in Memphis, Tennessee. The group will host a holiday party handing out gifts and participating in various activities with patients and their families.

Learn more about Window World Cares and its affiliation with St. Jude by visiting www.WindowWorldCares.com

About Window World®
Window World®, headquartered in North Wilkesboro, N.C., is America’s largest replacement window and exterior remodeling company, with more than 200 locally owned and operated offices nationwide. Founded in 1995, the company sells and installs windows, siding, doors and other exterior products, with a total of over 10 million windows sold to date. For the second consecutive year, Window World ranked “Highest in Customer Satisfaction with Windows and Doors” by J.D. Power. Window World is an ENERGY STAR® partner and its window products have earned the Good Housekeeping Seal for seven consecutive years.

Window World Participates in St. Jude Give Thanks. Walk.™ in 28 Locations Nationwide | Window World of Pensacola